On a sunny Saturday afternoon on October 17, the Humanities Truck team met up at Malcolm X Park to join in a celebration for Indigenous People’s Day.  After a week of rain that had led to the postponement of the event and six months of being isolated by the pandemic, people from across different communities had a palpable sense of joy as they came together to celebrate and honor the struggles of Indigenous People.

The event provided an opportunity for the current HT Team to come together for the first time in person as we spent the day interacting and learning from Indigenous rights activists. Furthermore, new fellows Laura Sislen and Kai Walther got to see the Truck in action for the first time.

Planning for the event came together very quickly.  The Piscataway Indian Nation, the American Indian Support Project, the National Council of Arab Americans, the Hiroshima Nagasaki Peace Committee of the National Capital Region, the All African People’s Revolutionary Party (GC), and Pan African Roots decided in late September that there should be an in person gathering at Malcolm X Park and that elders and others who did not feel comfortable coming together in person could call in to deliver messages to the gathering and also watch a livestream of the event.   Given the work we had earlier done in Malcolm X Park, the organizers invited the Humanities Truck team to join in, present an exhibit, and conduct interviews throughout the afternoon.   Over thirty other speakers and performers and dozens of others working behind the scenes worked tirelessly over two weeks to make the celebration happen.  We were happy to be one group among the many who made the day so impactful. 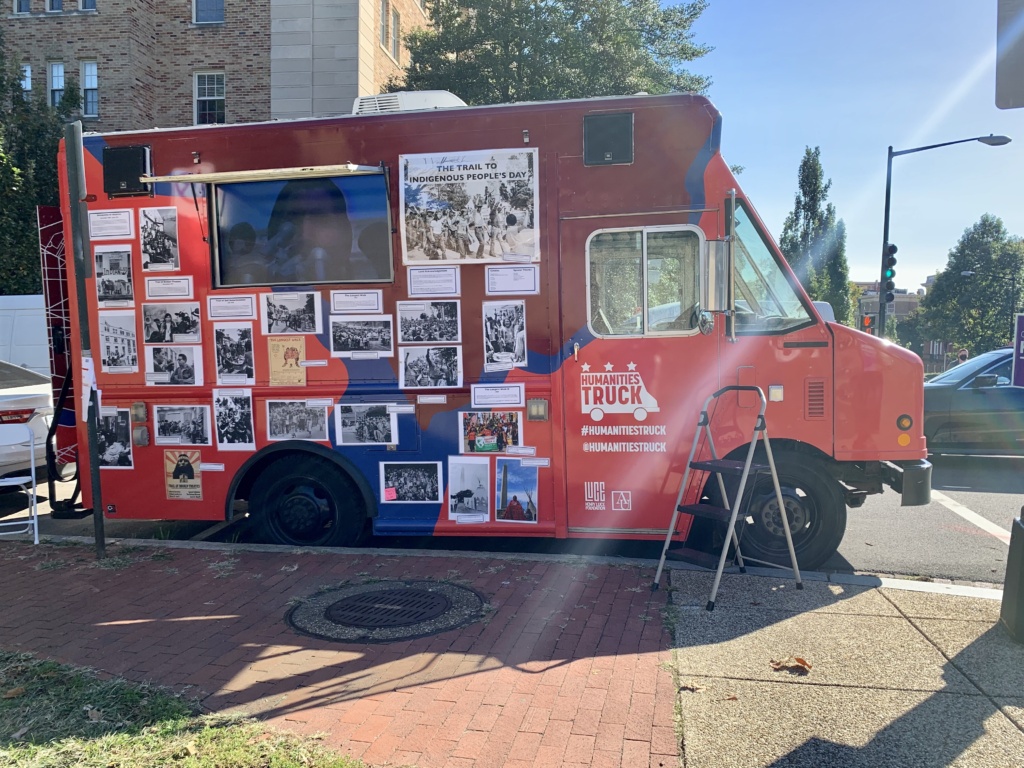 The Exhibit: The Trail to Indigenous Peoples’ Day

It’s not easy building an exhibit in two weeks.  Fortunately students in AU’s Public History program, who had developed a different exhibit in the spring while working with the Piscataway, agreed to let us draw upon portions of their exhibit.  The exhibit was built knowing that there might be people present at the event who had a personal connection to the events it covers.  We also sought to engage with the connections Malcolm X Park has had with Indigenous activism over the past fifty years.  Several photos included in the exhibit were taken inside the park in the 1970s.

The spot we had a permit to park in was occupied, however, a road  construction crew helped us secure an even better spot on 16th and W. St. NW.  Located at the busy entrance to the lower section of the park,  we set up our exhibit on the exterior of the truck and streamed a video documentary of the Longest Walk from 1978 — all of which you can find on our digital exhibit.  The video shaped the soundscape around the truck and attracted people passing by to come over to see what was going on.  We did not use the interior of the truck in order to avoid unsafe crowding, and we made sure the digital exhibit was up prior to the event so people could engage with it from their own phones.  Using boom microphones, video cameras, and sanitizing wipes, we also conducted several interviews inside the park, which can now be viewed in the web exhibit.  If anything, our participation in the celebration showed that we can do programming safely in outdoor spaces.

Given our prominent location, many people happened upon the exhibit by chance.  A man from the road construction crew pointed to a picture and said “this looks like me” and he brought one of his coworkers over to check it out. One woman exclaimed, “Oh! I grew up here! So that’s what was going on! I was wondering why there was a teepee.”

As we expected, there were several people at the event who had deep personal connections to the events addressed in our exhibit.  Several people had participated in the walks, and one person’s parents had been part of the occupation of the Bureau of Indian Affairs in 1972.  For them, the exhibit served a similar role as a family photo album.  A Native American, who performed at the event, noted that a person she had worked with closely had been at the forefront of protests we had featured.  Viewing the exhibit, she reflected, “we can win with history on our side”.

Inside the park,  Kai and volunteers Sajel Swartz, Shae Corey, and Yael Horowitz conducted seven oral histories with event attendees. Despite worries that people would be hesitant due to COVID, we stayed busy during the entire three-hour event.

The interview questions centered around the setting and importance of Indigenous Peoples’ Day at Malcolm X Park, but narrators overwhelmingly provided richer answers than we could have hoped for. Many indigenous activists we interviewed emphasized the importance of education, whether formal or informal, to combat false narratives around Columbus Day. Representing Columbus’ colonization of the Americas as heroic and groundbreaking perpetuates violence, misunderstanding, and division.

Narrators used their oral histories to teach us interviewers and the Humanities Truck audiences about their own journeys towards finding the truth about Columbus Day. However, the work doesn’t end there. What do we do once we learn these truths and start our own education? As Choctaw Joe Gaines asked during his interview, “What are you going to do with that information now?”

Check out interviews from the event, videos and images from several walks and protests, and consider interviewing with us if you were or are involved with Native American protests and walks and/or the American Indian Movement on the exhibit page.