On a cold Saturday in November 2019, the Fellows of the Community Voice Lab (CVL) drove the Humanities Truck to an event called “Building Equity For The Future,” a Community Fest in Southeast Washington D.C. The event was part of the Greater Washington Urban League’s young professionals affiliate called the Thursday Network (TN). TN’s mission is to assist the League “in its goals and develop outreach programs that have positive influences on African-American youth.” In support of that mission, CVL featured several short documentaries produced by American University students in collaboration with lifelong African-American D.C. residents. CVL’s purpose is “to express the storyteller’s authentic voice in recounting their lived experience in Washington, D.C.,” and as such, screened films inside the truck’s exhibition space about entrepreneurship, art and hope. 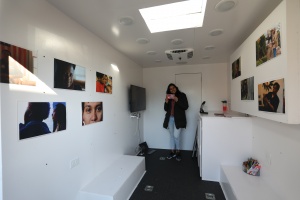 That mid-morning in November, the sun had warmed up to a balmy 40 degrees as the truck pulled up to the front of Union Temple Baptist Church with our team, Amelia Tyson, Courtland Sutton, Eman Dakhil, and Grace Eggleston. Fully decked out in coats, scarfs and gloves, we opened the truck and invited passers-by and attendees of the Fest to view a selection from CVL’s film series. Lining the walls of the truck were portraits of the women-protagonists from the documentaries: all lifelong D.C. residents, all African-American women.

A Mother’s Love, So All May Eat, Studio Elan, and HiphopMommaPrincess were among the short films screened using the truck. These films feature the story of a young mother, a director of a nonprofit, an activist, an entrepreneur: all women local to the district, all untold stories.

One of the event attendees was Kawanza Billy, an entrepreneur and CEO/founder of K. Billy Push. Kawanza was impressed by the stories because they spoke to her professional life and revealed commonality in the storytelling aspect of her brand. She remarked how important stories like these are in contributing to a full and vibrant narrative of D.C.

As the event began to draw to a close, two gentlemen who had staffed the table for the 2020 Census Complete Count Committee at the event joined us on the truck. After learning about each film, the participants were enthusiastic about the importance of these stories and their promotion of representation, equity and social justice at the heart of the local DC community.

The most popular film was HipHopMomma Princess Best which tells the story of a woman finding strength in the activism of storytelling through hip hop, addressing empowerment of and positive messages for women, particularly black women overcoming past traumas. One of the men remarked that this type of documentary filmmaking allowed people to tell their own stories, fostering dialogue and helping the community to know its past and present. We are grateful that the truck provided a platform to share these films back with the community.

To learn more about the Community Voice Lab, visit: https://www.american.edu/soc/community-voice-lab/