This Fall, the Humanities Truck went on the road once again with an exhibit featuring day laborers as photographers of their own everyday lives, alongside portraits of day laborers at the corner of the only Home Depot in Washington, DC. taken by Trabajadores Unidos de Washington, DC’s activist Celestino León. Our purpose was to remember a recently lost friend of the community.

In late October, after leaving the hospital, longtime day laborer Polo Cruz passed away at the corner of the Home Depot surrounded by a handful of his day laborer friends.

Together with the Humanities Truck, our community Partner TUWDC organized a memorial to honor this Honduran who had been a strong ally and a bridge between the day laborers and the organization. 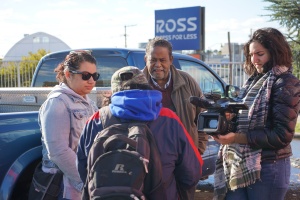 On a chilly morning of November 1 st , after the hiring spree waned, the Truck, a few American University students and our community partner arrived at the corner of the only Home Depot in DC. As a now familiar site, the Truck was equipped with a table and microphone to collect oral histories as well as TUWDC’s ID machine. We also held a renewed photo exhibit. We also provided coffee and pastries to encourage the community to gather and talk together.

As soon as the workers saw Arturo Griffiths, TUWDC director, they lovingly welcomed him and hugged him over and over again. Coffee in hand, little by little they began to gather around the Truck to talk about Polo whose enlarged photo was displayed on the doors of the Truck. The day laborers’ exhibit was held inside.

As the workers entered the Truck to see the exhibit, we could hear them talking about how they see themselves in the photos. Some laughed, some scratched their heads at their wrinkles, or gray hair. Others looked again and again and more closely at themselves and their friends. Most of all, they appreciated seeing Polo’s photo there. A few days earlier, Polo’s body had been flown back to Honduras, but his friends at the corner wanted to give a proper goodbye exactly where he passed and where he was cherished. 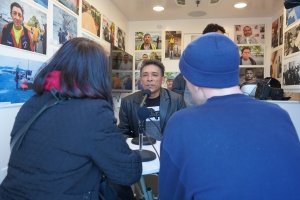 Polo’s brother, Enemecio Cruz, his wife and daughter also visited the corner that day. He had the opportunity to hear how much his brother was going to be missed, how much he helped a lot of the workers, about his jokes, his big hands, and his troubles. Later, we walked with the Cruz’ family to the place where Polo had fallen. He kneeled down touching the white cross and the fresh flowers that the day laborers had place there. It was an emotional moment for all. A bit later, back in the Truck, Bailey Boyer, an AU student, had the opportunity to formally record an interview with Enemecio where he shared a few details about his brother for us to learn more about the man Polo was. This oral history will be part of the Truck’s archive. Once it is edited, we will send a link to him so he can share it will family and friends in Honduras.

Back in the Truck, eight day laborers had their TUWDC photo ID taken. This ID becomes a lifeline for these workers as they present it to potential employers, for hospital visits or even immigration issues. Having a number to call can make a world of difference to day laborers with limited social support.

Alejandro Campero Oliart, another AU student, is currently conducting a research project in which he is collecting data to inform TUWDC to find solutions aimed at improving the mental health and overall wellbeing of the workers. Polo’s passing underscores the relevance of this kinds of projects on a transient and highly overlooked population.

Given that the Humanities Truck is becoming a familiar sight, next semester we will be visiting the corner more often in order to continue assisting TUWDC in collecting living histories while we also find ways to improves the lives of these day laborers. 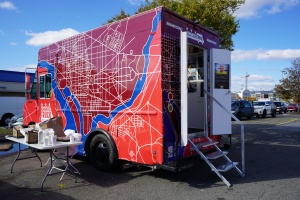 The exhibit, Invisible Hands: Jornaleros Manos Invisibles: Day Laborers, was inaugurated at the Katzen Museum on September, 2016 and was organized as a collaboration between American University and our community partner Trabajadores Unidos de Washington, DC (TUWDC). Since 2013, TUWDC has striven to empower day laborers/jornaleros to know their rights, defend themselves, and advocate for policy change. The exhibit was curated by jornaleros and AU faculty and students in collaboration with Arturo Griffiths and Celestino León of Trabajadores Unidos of Washington, DC. It was sponsored by the Department of World Languages and Cultures, the Studio Art Program, the College or Arts and Sciences, the DC Commission on the Arts and Humanities, and the Humanities Truck.

Ludy Grandas is a senior professorial lecturer at the Department of World Languages and Cultures. Her teaching focuses primarily on nation and state formation in Latin America, Studies of Culture in Latin America, the Studies of Culture in Hispanic populations in the US, as well as Spanish Language. Her research interests include labor, immigrant labor, cultural studies as practiced in Latin America. For the last few years she has been collaborating with Trabajadores Unidos de Washington, DC, a non-profit organization whose mission is to empower day laborers, low income workers as well as immigrant workers in DC. She has led two Community Based Learning Courses which connect AU students to these specific populations.

2 thoughts on “Day Laborers at the Corner: Coming to Light”