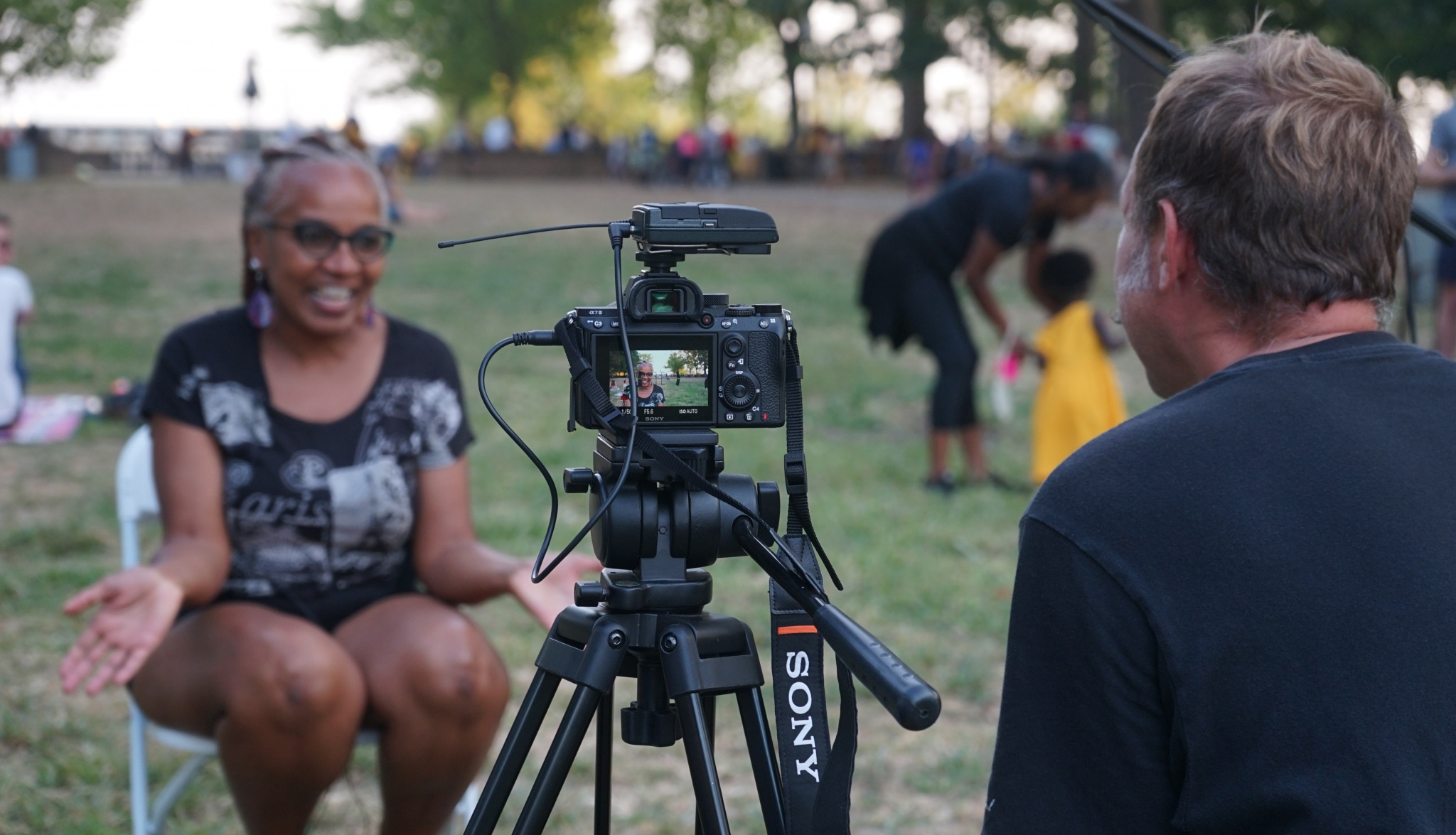 On any given Sunday, one can find vivacious energy and various patrons gathering at the historic landmark, nestled between Columbia Heights and Adams Morgan, called Meridian Hill/ Malcolm X Park.  Drummers, old and new, gather to form a drum circle spreading a unified beat that entices all who hear the music to dance along. Merchants post up by the Joan of Arc statue to sell unique goods. Yogis commune in meditation. Families and friends rest in the hammocks and in the grass in fellowship.

This park is a safe space for all people to enjoy; however, historically the name and purpose of this space have been contested. It’s city legend that fifty years ago, Angela Davis announced at a rally that the park was renamed “Malcolm X Park.”  This name is not formally acknowledged, but it is locally respected by many. On Sunday, September 22nd, the Humanities Truck parked just outside of Meridian Hill/ Malcolm X Park at 15th and Chapin St with a poster that read “Malcolm X Park: Celebrating 50 Years.” We hoped to start to unravel and understand this contestation by documenting stories through brief oral histories with the people using the space. 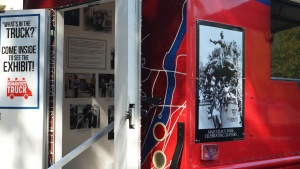 Why do some people hold tight to the formal name Meridian Hill, while others lovingly embrace the name, Malcolm X Park?

Is the park still a place of protest— a safe space for Black Washingtonians and other historically marginalized groups?

How has the park changed since its informal renaming in 1969?

A man and a woman stopped outside the truck on their way into the park; it was her first time ever visiting.

“See! I was just telling you about this!”

The couple stopped and spent some time in the truck, admiring the photographs, mostly black and white, depicting protest, drum circles, and everyday life moments— children doing face painting, a group of girls spilled all over a bench, posing for the photo.

The show included fifty images of priceless moments in the park from 1974 to 2014, taken by local activist and photographer, Nancy Shia, a long-term resident of the area. The images in the Truck celebrated the community history and the park as “Malcolm X Park” a community space, particularly for African American residents of the District then and in the present. Many visitors to the exhibit were new to the area, in awe of the decades of protests and longevity of the drum circle illustrated in Shia’s photographs. Some were visiting for the first time, other were recent transplants, some had lived here for a few years. Many were learning for the first time, how the park was a place of protest, security and culture for generations.

“You can really see the different faces of the park,” a visitor commented while exiting the truck.

While the truck was parked just outside the park, our team set up an interview station inside the park, just steps away. We invited park-goers to tell us about themselves and their history with the park.

From oral history interviews and reflections from the Nancy Shia exhibit, our team found the park holds different meanings for different people. For many long-term, Black Washingtonians and transient Black visitors, the park is and should always be Malcolm X Park, a safe space for culture and community without fear of persecution. As one of our interviewees noted, 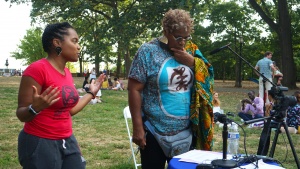 “We renamed it, we took authority. It was always us… Always activity, always us here. Many vendors, I still have many ebony statues that I bought here from 40 years ago. Now I have my daughter, my grandchildren, and great-grandchildren here.”

However, to some of our transient narrators, the park’s formal name carries value and holds a deeply spiritual and historical significance to the District. One community member noted,

“The Meridian line has the most spiritually charged energy. Sixteenth Street is the Meridian line.  That’s why there are so many churches, so many Egyptian symbols…It’s a magical place.”

Some community members embraced the recent change in the park’s demographic. A few even expressed the belief that the park was not properly cared for until the demographic significantly shifted. Community members who overheard these statements interjected to dispute these claims of a grimy park saved by gentrification, creating a rich conversation among different visitors with different histories in the park. It became clear through these conversations how individuals and community groups have taken ownership of the park, not with a name, but with their consistent commitment to clean and tend to the park, making it a safe and beautiful space for people to spend their time.

Although the face of the community has changed, the park is still a safe space for many Washingtonians. For native Washingtonians, it’s a place of authority and culture that they can share with their families. For transient community members, the name Malcolm X Park is respected but they appreciate the changes to the park and its new “diversity.”

As the demographics of the park shift with the changes in the surrounding neighborhoods and the cost of living rises to leave many marginalized Washingtonians unable to sustain living in the area, I wonder how the park will look in five years. One thing is certain, no matter the era, Meridian Hill/ Malcolm X Park has proven that it will withstand the test of time and more presently still stands as a space of shared culture and community.