I got lost trying to find my way home after the first day of high school. Google Maps was indispensable and inseparable as I tried to figure out the winding streets of my own hometown. Sometimes, when my mind wanders, I would think about what happened to the people who ask me for directions.

That’s the reason why I chuckled when Naoko asked me to join the Group Portrait Journey as her assistant. I was flattered, plus a teeny tiny hint of worry over my convoluted sense of direction. But the sheer ingenuity of the project was captivating.

Naoko was trying to make a map, she told me. But it’s not just an ordinary map. In her own words, it [the map] would “visually trace the intersectional nature of personal identity and our intangible connections as one large community in Washington, DC.”

We called it a map. But it’s really a metaphor. Rather than buildings or streets, it’s a map of community constructed from group portraits of Washingtonians and their collective stories. 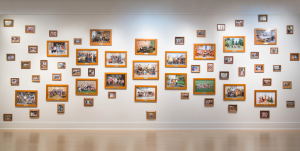 To initiate the project, we make a portrait of one social group by photographing them and collecting their stories, then we ask group members to introduce us to another group to which they belong. We will visit and make a portrait of that second group. From there on, we repeat the process and continue to meet additional tiers of social connections. It becomes a relay. And in the end, we would end up with our map, one that could exponentially be expanded to near infinity.

Naoko truly believes that all groups will connect eventually, that DC is immensely diverse — culturally, nationally, ethnically, politically, and economically.  Apparently, all groups do seem to be connected in some intangible ways, because one of our very first portrait photoshoots in 2019 brought Naoko back to VisArts in Rockville, the very place where she started her project in 2015.

Mapping the community connections of people, that sure does sound like Naoko, I thought to myself.

She had done this twice before in Richmond, Virginia (2011), and, later, in Rockville, Maryland (2015). I learned as we sat down and sorted through all the photos from Richmond and Rockville to prepare for the exhibition. But this time, Naoko gets to drive the American University Humanities Truck around town. And the exhibition is mobile. And I was her designated map reader. 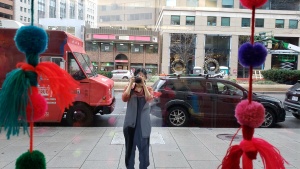 And thanks to Google Maps, we haven’t got lost, at least not yet.