This past Saturday, September 18th, the Humanities Truck participated in the 2019 “Celebrate Petworth” Festival. The event, organized “by and for the residents of Petworth” brings together the community to celebrate the neighborhood’s history with food, drink, and live entertainment. The Truck, posted up at the corner of 8th and Upshur, was in a prime location to interact with and collect brief interviews from long-standing Petworth residents (and direct a few passersby to the ticket booth).

The neighborhood of Petworth, situated in the northwest part of D.C., boasts a rich residential history that goes beyond the allure of President Lincoln’s Cottage. Between the 1940s and 1960s, the community’s demographic make-up shifted substantially, resulting in a predominantly black neighborhood filled with locally-owned businesses and a close-knit community structure. However, since the early 2000s, as the result of gentrification and the movement of younger individuals and families away from the downtown area, the community is once again changing. These changes, reflected upon both positively and negatively by many of the individuals we spoke with, have resulted in an even greater diversity of community members and businesses, but have also increased efforts to chronicle and memorialize the community as it has been throughout various points in Petworth history.

This was my second event with the Truck and I was excited for the opportunity to hold space with and hear stories of residents in the Petworth community. As a first year Ph.D. student and new D.C. resident, these events are incredible opportunities to learn about the various communities and histories that make up D.C. We set up a recording area including camera and audio recorder with the intention of collecting abbreviated oral histories—approximately 10-15 minutes—with Petworth residents, reflecting on their time in the community, major memories or events they have witnessed, and change they have noted over time. In practice, however, (as is often the case with public history), these interviews often took on a life of their own. What would begin as an interview with one or two individuals would quickly become a group session, attracting other attendees to watch, listen, learn, and sign up. The organic development of these group interviews resulted in invaluable reflections by community members who had grown up and attended school together, and as they recounted years spent in the community, their reflections were often met by clapping and cheers from the growing crowd. The predominance of the narrators grew up or moved into the area in the 1960s or 1980s, and were able to identify the sites of public spaces that no longer exist, replaced by development projects.

We were especially fortunate to get to close the day with an interview with a woman at her home on Varnum. She had moved into Petworth in the 1940s, experienced the white flight and segregation that preceded the formation of a majority-black community by the 1960s, and is now living through another community shift. Beyond her foundations in the Petworth community, however, she has been incredibly involved in national political campaigns and community activism throughout her life. Her reflections, paired with the memories of those who arrived in Petworth at later points in the 20thcentury, begin to piece together a more complex and dynamic history of Petworth than newcomers or outsiders to the community might know or expect. 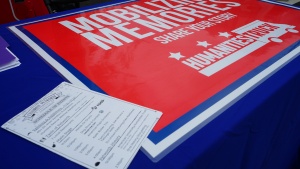 While the history of Petworth is still being written, the significance of collecting the narratives of its residents is readily apparent. As neighborhoods all over the District (nation…world…) experience influxes and departures of the people who call these places “home,” the need to preserve a series of snapshots of these communities throughout time grows. These snippets of neighborhood history help us understand how people find and form community, how those communities change, and the actors and decisions that fashion into their present state. Further, by listening to the hopes and dreams of its populace, we get to witness residents shape it into the neighborhood, community, city, they envision.

Carmen is a graduate student at American University pursuing her Ph.D. in History with a focus on public history and environmental history. She earned her BA and MA in History with a concentration in Public History from Virginia Tech in Blacksburg, Virginia. She comes to AU from William & Mary where she worked as Oral Historian for the past three years. Her research interests include oral history, public memory, and disaster studies, and she is particularly interested in how communities are impacted by and respond to disaster events. Carmen is passionate about finding ethical methods of holding space for individuals to share their stories and highlighting story as a tool for pursuing social justice. She believes that story is the ultimate means of telling a more complete history and is arguably the most valuable resource we have in understanding who and what and why we are. Working with the Humanities Truck provides the ideal opportunity to come alongside partners in the D.C. community, listen to their stories, and collaborate on how to amplify their collective voices in a meaningful and honoring way. She is most excited about learning from community members and most nervous about driving the truck whenever that day comes.